New Faculty for the BBB Program 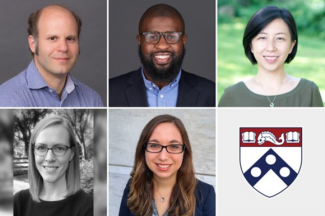 The Department of Biology hired Dr. Nicholas Betley as an assistant professor. He received training in neuroscience at Columbia University and began performing systems and behavioral neuroscience at the Janelia Research Campus of the Howard Hughes Medical Institute. Since arriving at Penn in 2015, Dr. Betley’s laboratory has focused on understanding how the brain prioritizes behaviors in a dynamic world. In the classroom, he teaches a course called ‘Neural Circuits for Survival’ that exposes students to primary research that explores how the brain coordinates behavior.

The Department of Biology also has hired Dr. Ishmail Abdus-Saboor as an assistant professor. Having trained at Penn and Cornell, Dr. Abdus-Saboor has created a lab at Penn that uses state of the art molecular genetic approaches to study the neurobiology of somatosensory processing.  He will be teaching a seminar course next year on the “neurobiology of pain”.

Biology recently recruited Dr. Yun Ding as an assistant professor.  Having trained at the Chinese Academy of Science and the Janelia Research Campus of the Howard Hughes Medical Institute, Dr. Ding will set up her lab at Penn to explore the genetic and neural basis of animal behavioral diversity focusing her efforts on courtship displays in the mighty fruit fly. Along with Dr. Schmidt, she will co-teach "The Evolution of Behavior", the popular course previously taught by Robert Seyfarth and Dorothy Cheney.

The Department of Psychology has hired Dr. Adrianna (Anna) Jenkins as an assistant professor.  Dr. Jenkins trained at Harvard and University of California Berkeley, and she has established her lab at Penn to study the cognitive neuroscience of flexible human social behavior.  She has developed a new seminar in cognitive neuroscience called The Social Brain.

Psychology has also brought on board Dr. Anna Schapiro as an assistant professor.  Having trained at the Princeton University and Harvard Medical School, Dr. Schapiro is now building her lab at Penn to study human learning and memory using cognitive neuroscience and computational modeling approaches. This fall she is teaching a seminar course entitled Sleep and Memory.

© 2022 The Trustees of the University of Pennsylvania
Penn Weblogin