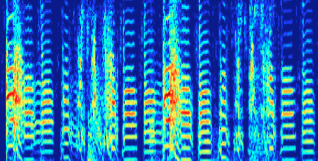 Effect of respiratory feedback on song production in zebra finches

The focus of my research is to identify and classify the neurons in the nucleus of the solitary tract, nTS, in the respiratory brainstem of zebra finch, which is thought to be the main source of non-auditory feedback during vocal production and learning. To understand the role of nTS, I take neurophysiological recordings in male zebra finch and use retrograde and anterograde tracers to analyze connectivity between nuclei. I will quantify the level with which the information carried by nTS affects the highly stereotyped qualities of song by performing microlesions of nTS and looking for any consequent changes in song production. This image above displays the sonogram of a typical zebra finch song. Time is represented on the x axis, frequency is represented on the y axis, and amplitude is represented by the color scale with red being the highest. Each individual chunk of sound represents a song syllable and together the repeated syllables make up a motif. Once the song is recorded, a series of analytical tools can be used to calculate variations in acoustic features caused by experimental manipulations.